Over the past week, CNN has played several year-in-review montages, on Monday’s CNN Newsroom it was time to review the year in media. According to Brian Stelter, if 2020 proved anything, it is was that the country is split into those who get accurate information from news sources like CNN and those who get disinformation from places like Fox.

During the pandemic portion of the montage, Stelter played a clip of colleague Chris Cuomo on April 1 explaining, “This virus came at me. I’ve never seen anything like it. I had a fever, we’ve had a fever, but 102, 103, 103+ that wouldn’t quit and it was like somebody was beating me like a piñata.”

Stelter used Cuomo’s experience to declare, “The pandemic was accompanied by an info-demic of misinformation.”

After playing a brief clip of Rush Limbaugh from February 24 saying “The coronavirus is the common cold, folks,” Stelter highlighted how Fox Business and Trish Regan parted ways after Regan claimed on March 16 “This is yet another attempt to impeach the president.” There was no clip or mention of Dr. Anthony Fauci saying on CBS “There’s no reason to be walking around with a mask.” That was “outdated.” 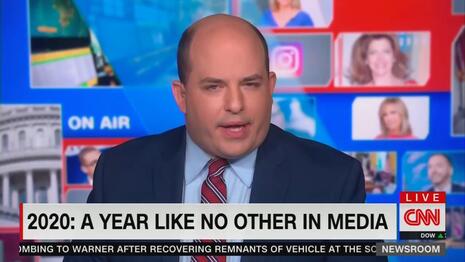 Stelter lamented then lamented that “Fox’s biggest stars faced no consequences for mocking public health measures.” Stelter’s evidence of Fox stars mocking public health measures was a clip of Laura Ingraham declaring on May 14, “Any of these blue state control freaks, well, all of them, they need to keep away from our children and away from our businesses.” He ignored the idea of Fox criticizing the personal hypocrisy of Democrats, excusing themselves from their own rulings.

It must be easy for Stelter to condemn Ingraham for wanting to keep businesses open while he reviews the year of industry that is perfectly capable of working from home. Staying home is also not what Chris Cuomo did when he was supposed to be quarantining and he faced none of Stelter’s desired consequences. Instead, he had that infamous segment with brother Andrew, the governor of New York, where instead of questioning Andrew about his nursing home policies, the brothers joked around with giant nasal swab props.

Others who have faced no consequences for downplaying the virus include Nancy Pelosi, and Dr. Fauci, who recently told the New York Times that he was basing his estimates on the necessary vaccinations to achieve herd immunity, at least partially on polls.

For his final thoughts on the media and the pandemic, Stelter alleged, “And if 2020 proved anything, it’s that America is split into two parallel universes of information. One much more tethered to reality than the other. Trump’s war on truth weakened the response to the pandemic, but testimonials from inside hospitals were undeniable.”

Stelter briefly touched on rioting and looting in the summer months: “Now at times, reporters were unfairly targeted for covering this truth. Some were assaulted while covering racial justice protests, and one CNN crew was even arrested live on the air….National newsrooms recommitted to covering race and justice stories, and activists told their own stories. For example, showing locals cleaning up after nights of looting and vandalism, showing good outweighing the bad.”

CNN, the network “more tethered to reality,” put a reporter in front of a raging fire with the chyron  “FIERY BUT MOSTLY PEACEFUL PROTESTS AFTER POLICE SHOOTING”. And “reality-based” MSNBC anchor Ali Velshi stood in front of a burning building and proclaimed ““this is… mostly a protest…It is not, generally speaking, unruly.” These clips didn’t make Stelter’s summation of 2020.